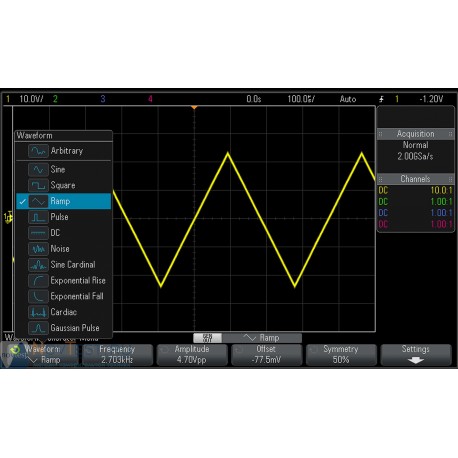 The InfiniiVision 3000 X-Series is the first oscilloscope to offer a 20-MHz built-in function/arbitrary waveform generator. Ideal for educational, design labs or R&D labs, where bench space and budget are at a premium, the 20-MHz built-in function/arbitrary waveform generator provides standard stimulus output waveforms to your device under test as well as user-definable frequencies, amplitudes, offset, and pulse widths and arbitrary waveform capability. WaveGen’s output is routed to a BNC on the front panel of the oscilloscope below the display.

You can use the built-in waveform editor to create custom waveforms to output on the WaveGen of the scope. It is also possible to capture a known good or golden waveform on a scope channel and then save that to the ARB and generate it through BNC output. Rethink how you test your designs by using real-world signals to test your margins to the breaking point.

This WaveGen option works with all InfiniiVision 3000 X-Series 2-channel and 4-channel DSO and MSO models.

Existing customers who have previously purchased DSOX3WAVEGEN will receive AWG capability after upgrading their scope to version 2.0.